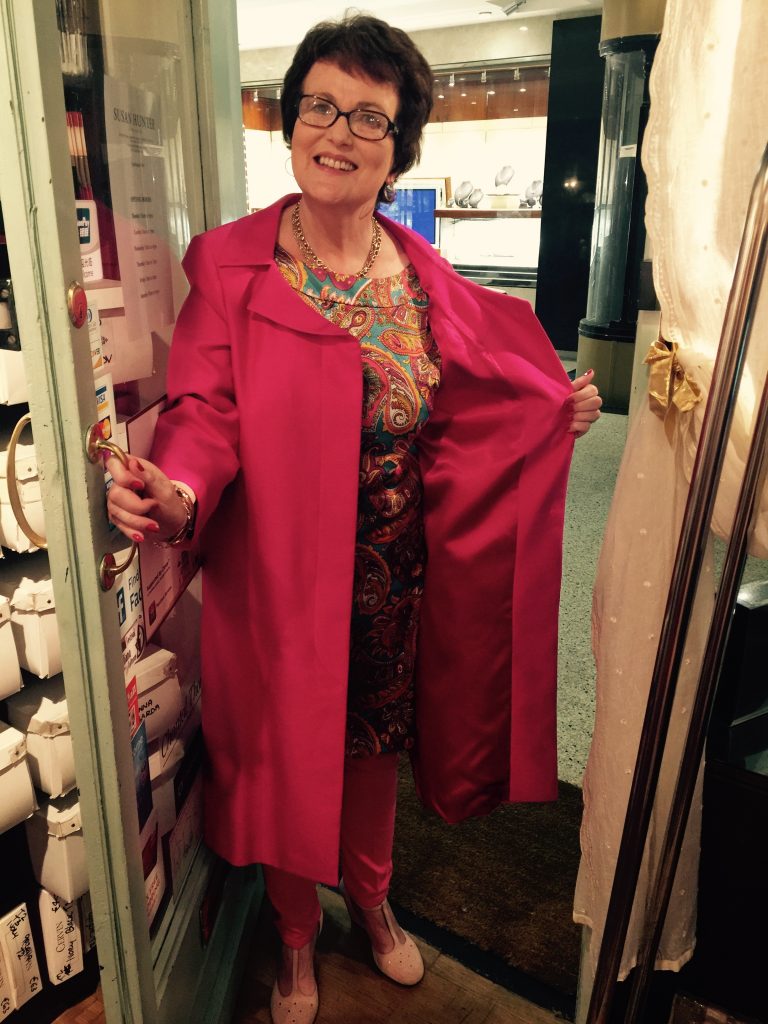 Yesterday, I was out and about busy prepping for my upcoming Ireland AM slot that will be aired live tomorrow morning at 9.45am! While I was selecting gorgeous looks from Susan Hunter Lingerie at the Westbury Mall in Dublin 2….a very excited lady popped in and she couldn’t believe I was in the shop so she could meet me:))))

While she was explaining to me enthusiastically how she loved fashion on both Ireland AM and Xpose, I was distracted looking had her very stylish and colourful outfit! She came down from the country spending the day in Dublin and she really looked the part. Not only that, I saw she was wearing a knee length fuchsia paisley print tunic style dress worn over a pair of coral skinny trousers which is one of my key tips I always talk about in my style segments. I was overjoyed that at least one person has been listening and that she took my tip on board!

The layer look is a perfect way for wearing a knee length dress and you do not want to show off bare legs or equally it is a smart and inexpensive way of updating a dress from a few seasons ago giving it a new lease of life by implementing the current layer look.

She deserves a spot in my Style is Ageless column!! 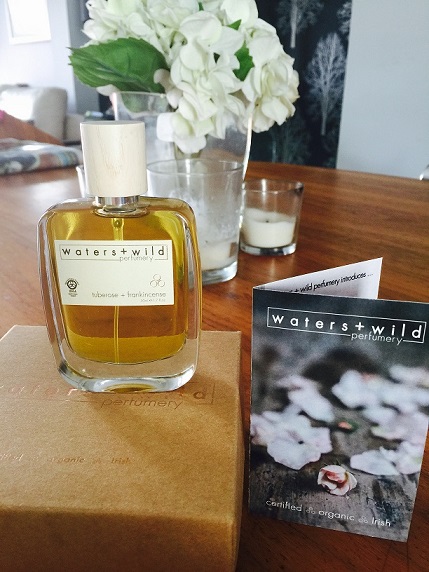 Each year in June, I look forward visiting Bloom Festival in Phoenix Park to get some inspiration from their show gardens. This time around I also came across a true gem at their Fashion Tent…waters + wild perfumes Irish and organic scents!

I recognised Joan Woods – one of the creators behind this amazing concept – from her fashion days when I was busy styling away. She has left the bustling Dublin city now truly behind and settled in the gorgeous countryside of Cork instead.

Spraying myself generously with a perfume is very much part of my daily morning routine while I won’t leave the house without my whiff of my chosen scent. Apart from that, I am also very fussy while I hate cheap, synthetic, sweet, floral smells so I was very curious and could not resist trying her 3 distinct perfume scents she had on display!

Already I was blown away by their created imagery and the way the bottle is shaped and its appropriately designed wooden top but I did not expect such a force majeur in a 50ml bottle! I tried the tuberose + frankincense first which they describe ‘as an exotic blend of intoxicating tuberose and deep aromatic frankincense’ making this scent classic and timeless. I love it!! It’s really strong, unique and this scent would set me up for the day! This scent would also be suitable for a guy while it has that masculine touch to it.

The others 2 choices are:

I was well impressed and I think they are a perfect gift to a friend, special one, family event, gift for a hen, baby shower, Good Luck gift ….you name it. The way they have packaged it makes it much more expensive looking than €59!!

I am wishing Joan Woods and June Housden all the success they deserve for waters + wild perfumery!! Its’ a real gem and you just got a new follower!! 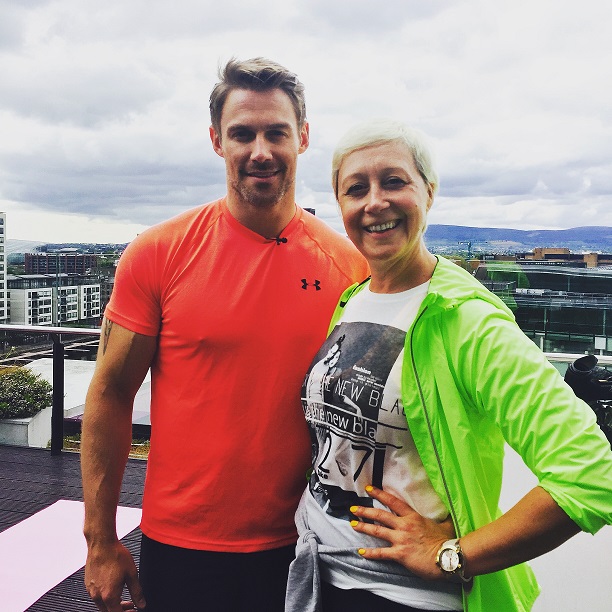 Work out exercises with Jessie Pavelka on Ireland AM

When I got the call from the Ireland AM production team asking if I was interested in taking part in exercising with Jessie Pavelka, celebrity fitness coach, showing AM viewers step by step his newest programme, I thought why not…I can do this right :)))

The timing was just perfect for me while I had just started a nutrition and mineral filled juice diet (more of that later) and I wanted to introduce more exercise routines into my weekly schedule. So no better way than to learn new moves from a celebrity trainer! When I googled Jessie it became quickly clear that a/the celebrity trainer wasn’t a woman as I had assumed b/he was responsible for some real drastic transformations on the well known TV show The Biggest Loser and now I started to get scared!!

During his interview with Ciara on how to approach exercising and how to become fitter, he said that you just need to start….in other words do not over think it which is what I tend to do!! I am on a mission now to ‘Beat the Bulge’ which has accumulated in a space of 8 years purely living the life in terms of drinking, eating and not exercising enough so Jessie has made me realise, I just need to start….now!!

Here we were, like the Ab Fab girls dressed in neon colours looking the part and ready to show the viewers how the exercises are done! Launching his new book ‘Programmes’ he had planned a weekly routine, a different exercise routine for each week day which we were going to demonstrate starting on Monday which is cardio based exercise….after Monday, we realised it was going be a tough week! But it made me even more determined to really start exercising more!! Our hearts were beating, sweat was dripping and all vanity disappeared on that gorgeous rooftop terrace at the Marker Hotel in a space of a few minutes!

We never looked so forward to Friday but we had to conquer Tuesday first which were arm exercises, Wednesday is focussing on the legs, Thursday is attention to the core and Friday was full body exercise with finishing off with my very much feared ‘burpy’ exercise!

I was wrecked and ofcourse in true TV style we had to do each exercise a good few times making sure they had the right shot, angle, you name it….trust me it was the longest week by far :)))))

Thankfully the Marker Hotel had set up a nice reward by offering us freshly squeezed vegetable juice and paleo style protein balls. Now all that is left to do is waiting for Jessie’s new book to arrive in the post!

Check out Jessie’s new book called ‘The Program: 21 days to a stronger, slimmer, sexier you’ available from Amazon or follow him on Twitter! 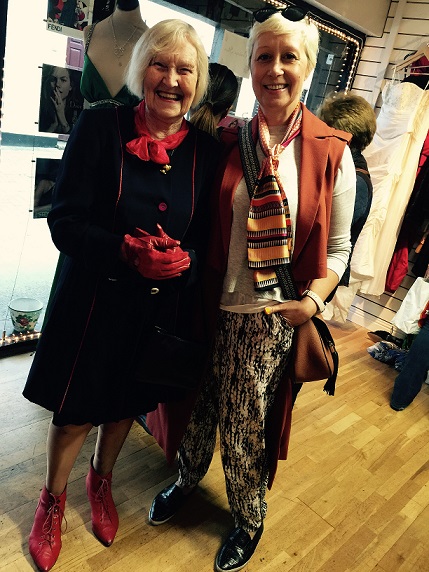 Last Thursday night, I attended a Ladies Night in Swords in aid of the NCBI (National Council for the Blind of Ireland) who raise funds through their retail charity shops located nationwide.

When arriving a glass of Prosecco was being offered by Pedro who caused a lot of hot flushes, giggles and blushing cheeks amongst the ladies while he looked very dishy in his bare chest, shorts and dickie bow showing off his gym trained muscles :))))

Apart from sipping bubbles and eating canapes, I also had the chance to browse around and I spotted some really nice pre loved items such as a Victoriana style black lace top, flat boho style sandals and an evening style red clutch bag. All had very affordable price tags and the proceeds will go to a good cause.

While looking for bargains, I also spotted a super stylish lady dressed in a black outfit and she added on a splash of colour by wearing very stylish red leather gloves, red neck scarf tied in a small bow and quirky red ankle style boots. I couldn’t resist talking and complimenting her on her chosen style which really made her evening.

While chatting to Caroline, I learned that NCBI Retail currently has 81 shops nationwide and they have over a thousand Volunteers and Job Activation staff who give their time to this great Irish charity. So if you haven’t done your Summer clean out as yet then maybe now is a good time to to go through your wardrobe. If you have any designer or high street items that no longer fit, that you never wore or is not really your style any more….google where your nearest NCBI store is to donate your unwanted fashion items and you can help raising funds for people who really need the help. 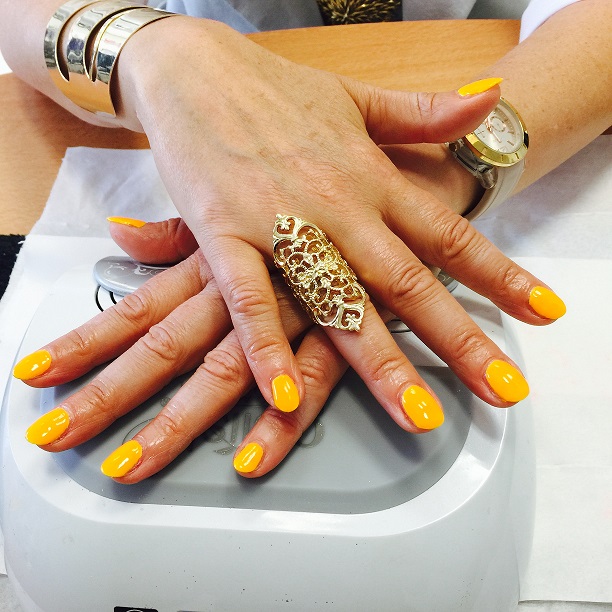 Styling and showcasing regular fashion slots on both Ireland AM and Xposé on TV3, I tend to use my hands a lot to point out to detail on a jacket or a skirt so I love having my nails done and in particular in a colourful shade so my hands really pop out from the TV screen during the piece!

Once a month, I go and visit the girls from Creative Academy based in Fashion City which is really close to the TV3 studio. Apart from having a great spa and nail service, they are also the nationwide distributors of an excellent nail brand called Creative Nails. Initially, I liked their Shellac polish but now that they brought the Gelish polish on the market I am a total loyal fan to the soak off gel polish while it keeps your natural nails very strong and healthy. Each season, Gelish nails launch fantastic colours and I always seem to be drawn to the really bright and colourful one’s! It’s great to be able to pick other shades than just the traditional red, pink or nude which most women would go for.

Their latest Summer range is called Street Beat and for my nephew’s communion a few weeks ago I picked the bright coral colour called Hip Hot Coral. Although it was very bright, my nails looked perfectly groomed and the shade matched perfectly well with any of the more classic styles I was wearing such as nautical, monochrome and my casual safari/khaki vibe. Last week during my most recent visit after the AM show, I picked the orangey/yellow shade called street-cred-ible which just shouts out ‘Sunshine & Holidays’! I love it!! I had my toe nails done as well and I can’t wait now for my fashion project in Malta in a few weeks time so I can show of my Gelish nails on the TV screen in Malta!!